Work on a Hollywood Production

... without going to Hollywood

Features and TV Shows Are No Longer Exclusively Shot in California

Producers will always try to stretch a dollar, and to get the most out of their budget, producers choose shooting locations based on how much value they receive.

Since film production is a big revenue generator, many states and municipalities try to lure these productions with aggressive tax incentives. In order to take advantage of these tax rebates and credits, which return up to 30-40% of a production’s budget, producers must hire local crews.

This is an opportunity for you to get on a Hollywood production faster and easier than if you were working in Los Angeles. And film commissions are desperate for qualified local crews so they can deliver on their claims.

The National Conference of State Legislatures published a report outlining the tax incentives offered by each state for television and motion picture production. 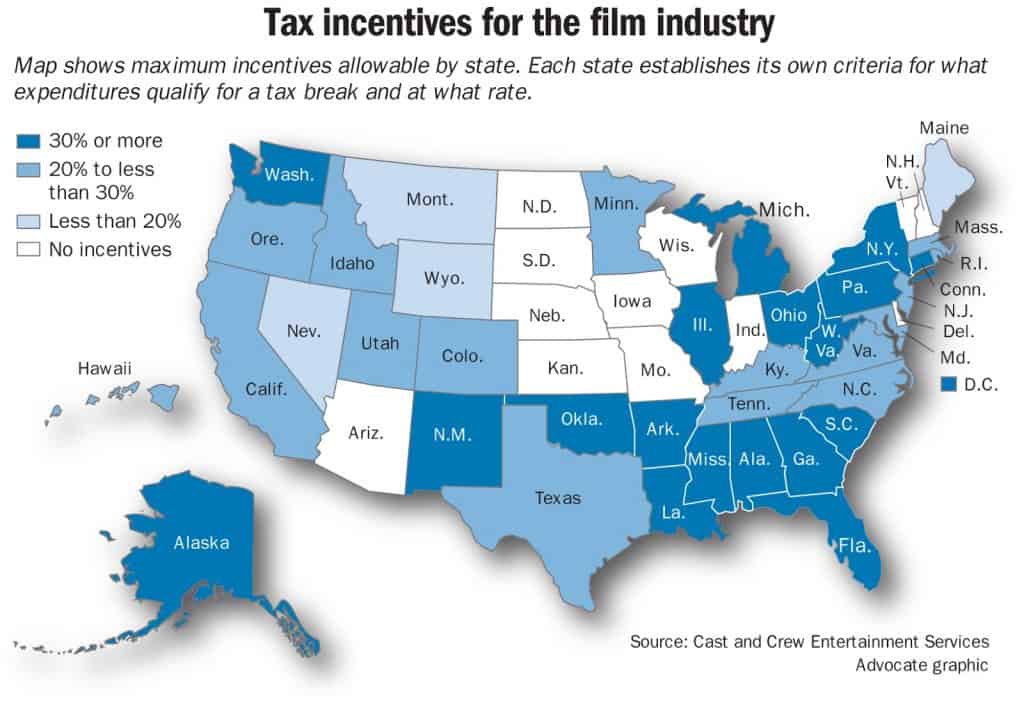 Work on a Big Budget Production Near You

Offering such aggressive tax incentives are a challenge to each State, because attracting a big-budget production is only half the battle. Receiving the maximum tax incentive often requires a production to hire local crews, placing a burden on the State to provide qualified crews. Most states have enough people to work on one major production, but once a second movie or TV show commits, there aren’t enough people.

Several state film commissions use FilmSkills to train their local crews in an effort to attract bigger budget productions, making it a win-win scenario for everyone involved.  The productions bring badly needed revenue into the state, supporting the local economy. Fringe businesses from hotels and restaurants to dry cleaners and rental companies all benefit from the millions of dollars spent.  Film commissions justify their use of tax incentives to the public while producers enjoy rich tax incentives.  And sitting in the middle of all of this is you and me, who benefit from high paying jobs.

“Our mission is to promote increased media production in Northeast Ohio using effective strategies for attraction and workforce development. While our interns assist with pre-production work and we often promote local workshops and job opportunities, the training they receive from FilmSkills is by far the most comprehensive. Our students love the convenience of being able to move at their own pace and their ability to study anywhere with an Internet connection. We’re very pleased with the extensive course content and continual platform updates.” – Greater Cleveland Film Commission

The amount of money spent on wages alone is in the hundreds of millions – and even billions of dollars, and it’s spent to hire people like you and me.

The production and distribution of movies and TV shows is one of the nation’s most valuable cultural and economic resources. Each year, film and TV production activity takes places in all 50 states, the District of Columbia and Puerto Rico. To find out more about the industry’s impact on specific states, click on the states below. Additional information and updates can be found at the state's film commission website located here. Note: Industry impact (jobs/wages) numbers reflect 2017 data. Numbers are updated annually following the release of the prior year’s Bureau of Labor Statistics (BLS) data. Data courtesy of the Motion Picture Association of America

Look Up My State
Some of the knowledge that is offered up, well most of it really, most people on the outside looking into the film industry would never have had access to. This site is a gold mine for learning the film industry.
Impulse Gamer
FilmSkills Student

Start Your Own Production Company

Learn how to offer script-to screen services for your clients.

Work on a Hollywood Production

Discover opportunities to work on big-budget productions near you

Work as a Freelance Crew Person

Work freelance on production crews on a job-by-job basis

Learn about career opportunities, plus 10 professional techniques to improve your film skills. The next course start in…

And start learning the filmmaking process from over 70 Academy Award and Emmy winning filmmakers. Used in over 90 film schools, from UCLA to Yale.

Choose from 20 self-guided online courses and earn your certificate.

Learn the entire filmmaking process from over 70 Emmy and Oscar winning filmmakers.

Mix and match lessons from the FilmSkills curriculum to learn your way.